March 2017
BBC Radio Oxfords Move It! campaign is about all kinds of physical activity and inspiring everyone in Oxfordshire to move their bodies more, regardless of their age or ability.
The campaign will run on air from 13th March  9th April this year.
The aim of the campaign is to increase physical activity across the county and promote the many health benefits that can be had from fitting more movement into our days. People of all ages are leading increasingly sedentary lifestyles spending more and more time at a desk, in a car, in front of a computer or watching television and the impact on peoples physical and mental health can be significant.
Physical inactivity is responsible for 1 in 6 premature deaths, 40% of long term illnesses and costs Oxfordshire councils £14m per year. 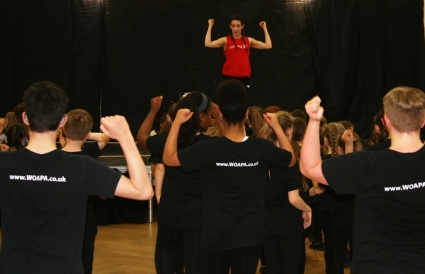 The BBC are working with a range of individuals and organisations including Oxfordshire Sport and Physical Activity to inspire the people of Oxfordshire to move their bodies more in a way that suits them. It isnt about joining a gym, losing weight or running a marathon, its about getting off the bus a couple of stops early, getting out and doing some gardening, or going to the park with your children. Doing a total of 20 minutes of physical activity a day can be more beneficial to your health than losing weight, lowering your cholesterol or even stopping smoking, and it can be great fun!
WOAPA students and adult singers joined the campaign to help inspire the rest of the county to Move It! by taking part in a fun dance project. A specially choreographed dance was commissioned to Move Your Hair from the recent Trolls movie, in order that as many children as possible would enjoy learning and dancing along.
WOAPA dancers were filmed taking part - watch this space for the final version!
West Oxfordshire Academy of Performing Arts - A Children's Saturday Theatre School based in Witney near Oxford, offering Singing, Dance & Drama classes | Witney Children's Choir | Witney Youth Choir (Showchoir) & Witney Choir for Adults (Adult Singing Group in Witney). If you're looking for a children's theatre school with Dance, Drama, and Singing classes on a Saturday and you live in or around the Oxfordshire areas of Faringdon, Witney, Burford, Carterton, Chipping Norton, Oxford, Eynsham, Woodstock and Abingdon, WOAPA is for you! Contact us for a FREE taster session NOW!
back to all |
prev
| 130 of 494 |
next
Save & Close